One Street in Warwick now has more than 20 traders that are using Twitter to promote their trading environment along with their individual business. Remarkably the Street in question, #Smithst, is Warwick’s oldest shopping street. So here it is, the old willing to meet the new.
However it appears that this is not the case all over the town. Recently an entrepreneur walked the streets of Warwick to promote a #Twitter course for beginners. A tweet from this person revealed a certain amount of hostility & disregard for using this form of communication and promotion.

The link below may show just how foolish some are by disregarding new ways to use #socialmedia. 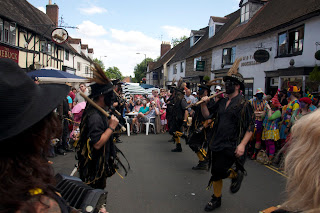 The Smith Street Traders Association (SSTA) are also planning to use technology during their key event later in the year. Smith Street hosts a “Party” on the Street. The event consists of a Craft Market, made up primarily of local business’s and other independents. This is coupled with music and entertainment. On the same weekend of the Craft Market, it is also the Warwick Folk Festival. Warwick’s internationally renowned festival attracts crowds from all over the world as well as the UK.
So this year, to bring the event to even more people, the SSTA plan to stream, live from the Street party. So it appears that the traders of the town’s oldest shopping Street are truly grasping opportunities  that the world of technology & Social Media is presenting them.

I’ve been asked this a few times over the last 2 or 3 years. Why ask you is probably the thing that you’re asking yourself right now. Well, I assume they ask me because they knew that I’ve been self employed for about 28 years now and have continued to trade through 2 big recessions. One back in the ’80’s and of course the current one.
So to answer the question above this answer is, I don’t know. If I did, then I’d probably be the Chancellor of the Exchequer.

What I can share with you is this; to survive a financial armageddon like the current one, you need to get things right when times are good. Playing catch up is not a good position to be in. Trust me, I’ve been there. Remember that the Banks will give you an umbrella when it’s sunny but they’ll take it away when it’s raining.
When trade is good it’s hard to imagine that the things will go bad. When we’re busy dealing with all the things related to our customers and the money is rolling in things get overlooked. Keep an eye on all things financial on a very regular basis. Make it a habit.
These pointers below won’t make your business recession proof but I believe they will help you manage the recession. Try to be proactive not reactive.

Put your effort where it counts most.

The Burden of Debt

If you have “bad” debt such as credit cards, extended credit etc; deal with it as fast as possible. Their is nothing worse than the burden of debt. It will suck the life out of you. Remember though their are good debts such as a mortgage. It’s up to you to learn what your bad debts are.

If you don’t fully understand your accounts then learn how to read & analyse them.
Work out what your break even point is on a day to day basis.
Protect your margins.
Remember Cashflow & Profit are not the same.
Be very aware of your costs. Be diligent about checking them. Drill them down as much as you can, it’s one of the easiest ways to protect your margin. When you’ve done this, go back and do it again.

Getting to know and understand your customers. Gather information where ever possible. If you have it use technology to do this then make sure you use it to target and keep new customers. It’s expensive to get new customers so keeping existing ones is imperative.
I personally expect to lose 12% of my existing customers every year. This will be through no fault of mine. Customers leave the area, change jobs, indifference and even sometimes they die on you. Always be thinking about gaining new clients.

Look, I know these things may seem obvious but believe me, the obvious is often over looked.
By Paul Evans | Categories Uncategorized

This time last year (2012) should have had the residents and business owners of #Warwick seeing the end of the alleged improvements to High & Jury St. Alas, 12 months later, #humpgate continues.
The original plan, which agreed with the Warwickshire County Council (WCC),  The Chamber of Trade (COT) and the individual business’s, for the work to commence January 2012. However at The last moment WCC discovered a flaw in the design of the proposed humps. The work was delayed, with no notice given of when the contact may start.
Now what a lot of people don’t know is that the design of the layout and construction was done by WCC engineers, not as many were lead to believe by the contractor, Mcveigh.
The contract eventually started late March 2012 but no consultation with COT or the business’s of Warwick. No opinions were sought. The work commenced at a most inappropriate time. The roadworks were to be very disruptive with many traders suffering a huge downturn in takings over the crucial bank holidays of Easter Holidays.
These and associated works cost £496,000.00. They were funded by the Section 106 policy. This figure was gained by using the Freedom Of Information Act (FOI). However This wasn’t the end of the sorry saga.

Within 6 weeks the redesign of the original flawed plans showed massive failings. The newly installed speed humps deteriorated rapidly. The traffic, which is pretty constant on this stretch of road, caused the “cobbles” to become loose and now have been replaced.
In response to a request under the FOI act, it appears that the repairs have however been financed by “Other resources” 12 months on traders , Motorists and pedestrians are still facing disruption with more repairs commencing shortly. The repairs I suspect will also be paid from “Other Resources”

My request of information revealed that:

The construction cost of Phase 1 and 2 was £496,000.00 to pay for the road improvements.
The remedial works on High Street/Jury Street are required as a result of a design issue and the cost of these are being met from another source.

Currently Warwickshire County Council has more than 300  items with section 106 agreements on file amounting to £7.8 million.  Section 106 agreements set out a contribution from a developer towards the cost of infrastructure projects. The amount of money raised over a period of time is difficult to identify as agreements are made but the money not made available until the development progresses and some developments are never progressed. The amount we hold fluctuates as money is spent on projects and also contributions are received for new schemes. The figure above is for transport and highways schemes only as contributions can be agreed to other services such as libraries or school. 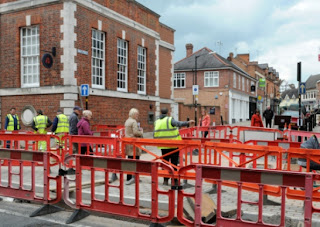 Lo and behold the #humpgate saga has risen its ugly head again.

As you have just read above, substantial amounts of money have been spent on making our High St a safer, more pedestrian friendly car / lorry loving environment. Well as you can guess it all went pear shaped quite quickly in fact.

The main issue was that a recognisable crossing was taken away and substituted with a “shared” sort of set up. Basically what it means is that no one has a clue what to do. By this I mean pedestrians and vehicles. Yep, folk were just wandering in front of cars, cars weren’t stopping, carnage ensued.

Now a year later down the (humped) road our council, albeit with a lot of pressure from various groups and our local MP Chris White have decided to re instate the crossing point.
Hurrah we cheered, but hang on a second, where’s the money going to come from? As yet no word from Warwickshire County Council (WCC). Is it going to come from the Section 106 fund or are the ever faithful taxpayer going to foot the bill?